China and Covid-19: Dancing with the Devil 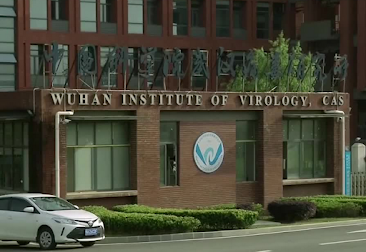 This is my latest piece for Quadrant magazine: https://quadrant.org.au/magazine/2021/11/china-and-covid-dancing-with-the-devil/

Posted by Daryl McCann Online at 22:14 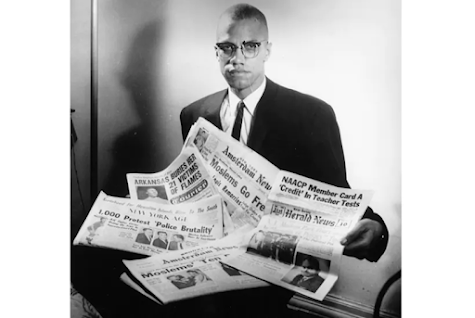 Here is my latest article for Spectator Australia: https://spectator.com.au/2021/11/saving-the-west/

Posted by Daryl McCann Online at 23:31 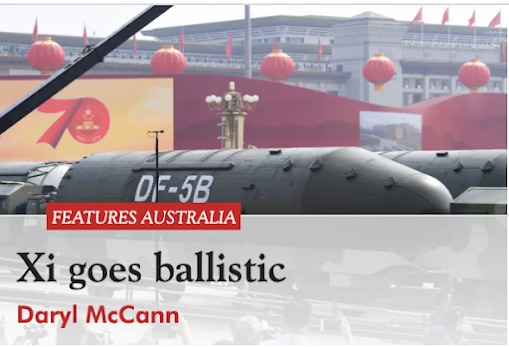 Here is the link to my latest article for Spectator Australia: https://www.spectator.com.au/2021/10/xi-goes-ballistic/

Posted by Daryl McCann Online at 13:58 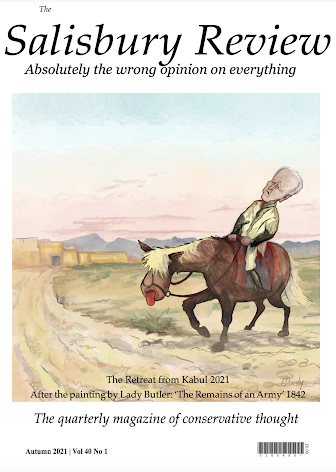 There has always been a place for the maverick in the Land of Oz. We even have a term for such a person – larrikin. Larrikinism, according to Russel Ward in The Australian Legend (1958), means not only holding a healthy disregard for convention and respectability but something more. To be a larrikin – ‘mischievous, uncultivated, rowdy but good-hearted’ – is a key component of the Australian national psyche. Ward’s speculation about the national character is officially out of favour these days, not the least reason being that ‘larking about’, being irreverent, independently minded, and non-compliant, is at odds with the protocols of our PC police, latter-day curmudgeons known in an earlier era as Negative Nancies.

Take, for instance, the latest injunction from Kim Ellis, director of Australia’s Antarctic Division (ADD). Ellis has just decreed that the official weekly limit on alcohol consumption in Australia’s Antarctic territory will be reduced by 60 percent. Ellis wants those under his authority to adhere to Canberra’s health guidelines of no more than 10 standard drinks a week, conveniently overlooking the fact that a guideline is a recommendation and not an edict. The crackdown on booze, the director of ADD explained, is a part of his determination to make the ADD ‘diverse and get gender equity’. The modern Australian woman, in my experience, enjoys a drink – from a boutique beer to a sauvignon blanc – as much as the modern Australian man, and so how Ellis’ wowserism will contribute to ‘gender equity’ I am not entirely sure.

Curmudgeons usually have any number of reasons to spoil the party and Director Ellis is no exception. Ponder his supposed concern that an inebriated scientist working in Australia’s Antarctic base is at special risk: ‘If you walk out of the accommodation module because you’re

blind drunk, into the snow, we may never find you again.’ Kim Ellis, whose history of working in the Antarctic goes back to 1979, was forced to admit that his new restrictions were not ‘sparked by any single incident’. In other words, there is no record of a blind drunk Australian scientist exiting the accommodation module in Antarctica and vanishing into the Great White. Ellis’ concern, to put it bluntly, is improbable or what Australians call a furphy. The director of the ADD belongs to the Australian tradition of officiousness and conformity, a mindset that is always at odds with larrikinism.

The two traditions – irreverent individualism and compliance – have battled it out during Australian history. Ward, obviously, argue in favour of the former having acquired the dominant position in our home-grown version of nationalism, a phenomenon that emerged at the end of the nineteenth century. Larrikinism, in the opinion of Ward, has its roots in the spirit of rowdy egalitarianism forged by ‘bushmen’ in outback Australia. Men, usually without wives and families, relieved the loneliness of their isolated existence by getting well-oiled with their mates whenever the opportunity arose. The opportunity arose, maintains Ward, during clearly defined breaks between their mostly seasonal work as shearers, drovers, and ranch hands. The magnificence of so many nineteenth-century era hotels or pubs in outback Australia is a testament to that bygone era.

Ward makes even further claims for his thesis. The so-called Anzac Spirit, developed by Australian (and New Zealand) soldiers in the 1915 Gallipoli Campaign, and subsequently advanced under the leadership of General Monash on the Western Front at the battles of Hamel, Amiens, and Mont St Quentin, turns out to be an extension of the Australian Legend. Most of our First World War Diggers came from the city rather than the remote outback and yet, according to Ward, they nevertheless adopted as their leitmotif the intrepid, impertinent, and boozy folklore of the bushman of the nineteenth century. The same ‘true blue’ spirit, at once resilient and democratic, animated the nation during the tough years of the Great Depression and our showdown with Imperial Japan in the Pacific War.

Anzac Day, celebrated on April 25 every year, the anniversary of the 1915 Gallipoli Landing, saw the veterans of the First World War and later the Second War marching through the streets of every town and city in the land before repairing to the nearest pub and knocking back pint after pint of beer and playing Two Up, a traditional Australian game of throwing 2 pennies up into the air and betting how they land, a form of gambling that, until the 1970s, was illegal on every other day of the year. Today, of course, the PC brigade would criticise the excesses of those long ago boozy Anzac Day re-unions as a case of ‘toxic masculinity’. Anzac Day is still observed in contemporary times but has become a much more sober and orderly affair, while the once forbidden Two Up is staple fare in every Australian casino.

The larrikin-versus-conformist divide can be observed in most aspects of Australian life. Consider, for example, our cricketing heroes, from the roguish flair of Shane Warne to the beer swilling prowess of Doug Walters, Rod Marsh and David Boon – all of them masters of ‘larking about’. But then our greatest icon of all, Donald Bradman, was the very antithesis of a larrikin. Respectability is written all over his 1930s-era mansion still standing in the Adelaide suburb of Kensington Park. Bowled for a duck in his last ever innings, at the Oval in 1948, left him just four runs shy of a batting average of 100. Sporting lore has it that such was the enmity between the strait-laced (and alcohol adverse) Bradman and his beery, knockabout Aussie teammates that some of them chortled with glee when the Don’s bails flew, his batting average downgraded in perpetuity to 99.94.

There is, ultimately, a balance to be struck. If the larrikin is prone to acts or irresponsibility and even delinquency, the Negative Nancy is disposed to being a killjoy. The 1971 Australian film, Wake in Fright, tells the story of a teacher from the city living in a remote outback town and falling in with a swag of larrikin-cum-criminals and losing his money and self-respect in bouts of drinking, gambling, and gruesome hunting trips. The twists and turns in Wake in Fright, which is after all a psychological thriller, are a long way from what I experienced in my first job – a teacher from the city living in a remote outback town – but the amount of alcohol I consumed that year, not to mention all the other personal misadventures, left me reeling. That said, there is something in the notion that we only know our limits when we reach them: recklessness can be cured if it doesn’t kill you first.

Which brings us back to the new directive issued by the ADD’s Kim Ellis and his determination to change the ethos in Australia’s Antarctic stations to more of a ‘café culture’ with ‘coffee corners and extras such as popcorn, as social alternatives to bars’. Director Ellis, to this end, has even banned the home brewery pastime which, as he himself acknowledged, has long been regarded as vital to the well-being of the researchers and technicians confined to their faraway accommodation modules without family or friends: ‘My first trip to the Antarctic was in 1979 and in those days…they used to send people off to breweries to learn the trade…it was considered that important.’

Ellis’ worry is that because the alcohol content in home brew is harder to predict, someone might inadvertently go beyond the recommended 10 standard drinks guideline and – yes – somehow stumble out the sealed door into the snow and never be seen again. In today’s PC landscape, Director Ellis’ curmudgeonly decree falls under the category of ‘socially responsible’. Ironically enough, even the largest brewers in Australia, almost all of them foreign owned, have also become socially responsible, their latest marketing campaigns promoting newfangled alcohol-free or low alcohol beers. What would Bazza McKenzie, always a cold tinny in hand, think of this disreputable situation?

There is, fortunately, a sting in this tale. While our major brewers turn themselves inside out to disguise the purpose of their existence – to induce tipsiness (in moderation, of course) – the people of Australia have developed a taste for beer produced in the multitude of micro-breweries now dotted across the land. In the spirit of the nineteenth century shearer and the Anzac veteran, and in the venerable (albeit defunct) practice of the Aussie home brewer in Antarctica, nowadays every touristy town under the sun has a local brew or two available to sample. To paraphrase Mao Zedong: the maverick brewers of Australia, like the maverick winemakers of Australia before them, have stood up.

Posted by Daryl McCann Online at 20:25

I now have a Substack. If you would like to keep up with my latest articles, this is a great way to do it.

You can sign up for the Daryl McCann Newsletter here, and get the articles straight to your email inbox.

Posted by Daryl McCann Online at 23:49 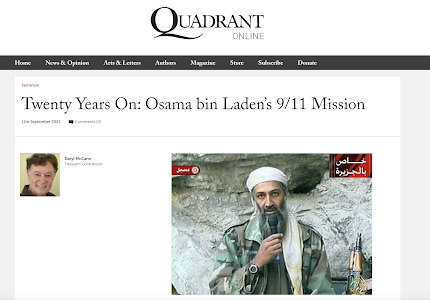 This recent column for Spectator Australia might also be apt: https://www.spectator.com.au/2021/08/zombie-in-the-white-house/

Here, believe it or not, is something on this theme published by the Australian Broadcasting Corporation in 2016: https://www.abc.net.au/news/2016-03-29/mccann-the-debate-we-need-to-resolve-about-modern-terrorism/7281158

My essay about the contemporary relevance of Nazi ideology and 9/11: https://quadrant.org.au/magazine/2019/03/progressive-ideology-and-the-ghosts-of-nazism/

Obama vs Trump on the Middle East: https://quadrant.org.au/magazine/2017/07/trump-versus-obama-middle-east/

Defeating Islamic Revivalism in the Battle of Ideas: https://quadrant.org.au/magazine/2017/10/defeating-islam-battle-ideas/

The Obama Doctrine vs Reality: https://quadrant.org.au/magazine/2016/10/obamas-war/

How the Left became Anti-Semitic: https://quadrant.org.au/magazine/2012/11/how-the-left-became-anti-semitic/

Why the West's progressive intellectuals cannot distinguish between Muslims per se and Radical Islamic Politics: https://quadrant.org.au/magazine/2016/01-02/things-fall-apart/

The House of Freedom: https://quadrant.org.au/magazine/2017/09/standing-house-freedom/

You can't say I haven't tried!

Posted by Daryl McCann Online at 14:45

The winter is coming: No more "sissy and distorted aesthetics" in Communist China 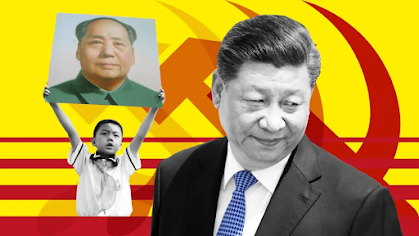 The winter is coming: https://fortune.com/2021/09/03/china-expands-crackdown-ban-film-stars-incorrect-politics-zhao-wei-vicky/

Posted by Daryl McCann Online at 15:25

I now have a Substack. If you would like to keep up with my latest articles, this is a great way to do it. You can sign up for the Daryl McC...