What John F. Kennedy's Assassination Did to America 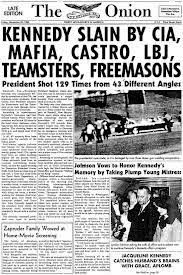 
Being only six at the time of John F. Kennedy’s death, I have no idea where I was when I heard the news. Nonetheless, I was gripped – in a creepy, unsettling kind of way – by television documentaries and magazine stories throughout my school years postulating one conspiracy theory after another – fabricated photographs of Oswald posing with a rifle, an alleged gunman on the grassy knoll, the impossibility of “the magic bullet” hitting both Kennedy and Governor Connolly, the pristine bullet assertion, the Head of State’s head reeling back instead of forward after the fatal shot, Jack Ruby’s connection with the Mob, Oswald allegedly anti-Castro and not pro-Castro, the Oswald doppelganger theory, the perfidy of the Warren Commission, and so on. Many of the conspiracy angles might have been far-fetched, including the one about the driver of the presidential limousine, William Greer, and yet how could there be all that smoke and no fire?